On this page you will find all the information about Ethyl Smyth. 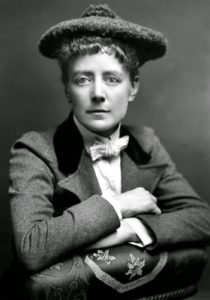 Dame Ethel Mary Smyth, DBE (22 April 1858 – 8 May 1944) was an English composer and a member of the women’s suffrage movement. Smyth was born in Sidcup, Kent, which is now in the London Borough of Bexley, as the fourth of a family of eight children. While April 22 is the actual day of her birth, Smyth habitually stated it was April 23, the day that was celebrated by her family, as they enjoyed the coincidence with William Shakespeare’s. Her father, John Hall Smyth, who was a major general in the Royal Artillery, was very much opposed to her making a career in music.

Undeterred, Smyth was determined to become a composer, studied with a private tutor, and then attended the Leipzig Conservatory, where she met many composers of the day. Her compositions include songs, works for piano, chamber music, orchestral and concertante works, choral works, and operas.

She lived at Frimhurst, near Frimley Green for many years, before moving to Hook Heath on the outskirts of Woking, but from 1913 onwards, she began gradually to lose her hearing and managed to complete only four more major works before deafness brought her composing career to an end. However, she found a new interest in literature and, between 1919 and 1940, she published ten highly successful, mostly autobiographical, books.

In recognition of her work as a composer and writer, Smyth was made a Dame Commander of the Order of the British Empire (DBE) in 1922,becoming the first female composer to be awarded a damehood. Smyth received honorary doctorates in music from the Universities of Durham and Oxford.She died in Woking in 1944 at the age of 86.